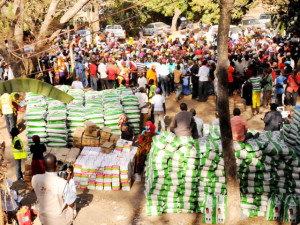 The News Agency of Nigeria (NAN) reports that the affected groups comprised those affected by the bomb blast at Dukku Motor Park and fire disaster in some areas of Gombe metropolis and Billiri town.

Others are: victims of insurgency attacks in Gombe metropolis, Dadin Kowa, Hinna and Kwadon towns of Yamaltu/Deba Local Government Area of the state.

Speaking during the presentation ceremony in Gombe on Thursday, the Head of Operations, NEMA, Gombe, Alhaji Ahmed Minin, said the materials were to serve as succour and not compensation to the victims.

Minin urged the victims to ensure judicious use of the items and not to sell them.

He said the Director -General of NEMA, Alhaji Sani Sidi had approved 200 bundles of roofing sheets; 100 bags of 3” nails; 100 packets of zinc nails and 300 pieces of ceiling nails for victims of insurgency attacks in Gombe, Dadin Kowa and Kwadon.

According to him, victims of bomb blast at Dukku Motor Park Gombe metropolis were allocated 100 bundles of roofing sheets; 50 packets of roofing nails; 30 packets of 3” nails; 100 piecess of ceiling board and 100 bags of cement.

Represented by Alhaji Mohammed Garba, Head of Relief and Rehabilitation of SEMA, rukuje told the victims that the gesture was not to replace the lost items but to cushion the effects of the damage done to their property.

The District Head of Bogo in Akko Local Government Area of the state, Alhaji Baddi Galadima-Umar, advised the beneficiaries to use the items judiciously and not to sell them. (NAN)