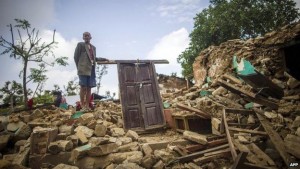 Nepal government has appealed for countries to provide more aircraft for its relief effort as reports continue to emerge of desperate survivors in remote villages. BBC was there:

Fights have broken out with victims demanding to be evacuated and not enough space on board helicopters, the BBC’s Sanjoy Majumder reports.

Nepal says 6,204 people are known to have died in the 7.8-magnitude quake and 13,932 were injured. But the fate of thousands more in many remote areas remains unknown. The government has warned that the death toll could rise to more than 10,000.

One thousand EU citizens remain unaccounted for in the quake that hit during the height of the trekking season, the EU ambassador to Nepal, Rensje Teerink, told reporters. Relief and rescue teams have reached most areas but many people remain in urgent need.