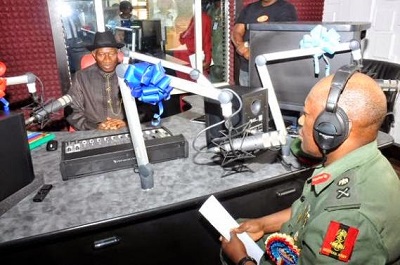 The way Nigerians make negative comments about the Armed Forces and Police is a cause of concern for President Goodluck Jonathan.

Speaking on Friday, May 22, during the inauguration of the Armed Forces Radio, known as “Defence Radio 107.7 FM”, the president said the sacrifices of these security operatives is the reason some can sleep at night.

He, therefore, called for an end to the trend.

According to him, the coming on stream of the radio station will help to enhance the operations of the military.

He said, “Other nations even bring foreign media to cover some of their operations and things are exaggerated as if they even work harder than we do.

“So, today that we are launching your radio station will be a turning point, where some of our operations will be properly covered and Nigerians will know.

“And I use this opportunity to call on all Nigerians, both our senior citizens and ordinary citizens to appreciate the commitment and the sacrifices of our armed forces.

“We wouldn’t have been sleeping if these people are not working.

“I always feel a bit worried and sometimes angry when I read in the papers negative comments about our armed forces and the police.

“These people fight and some of them pay the supreme price, leaving widows and young children as orphans”.

President Jonathan noted that rather than commend and encourage members of the Armed Forces, Nigerians unduly criticize them.

He admitted that while it is normal for the society to criticize, it should show some level of respect for members of their security forces.