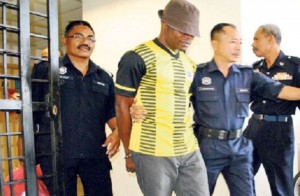 Although the world condemned the recent execution of eight persons convicted of drug related offences in Indonesia, including three Nigerians, former Secretary General of Commonwealth Chief Emeka Anyaoku believes they made their own fate.

Speaking with reporters after a meeting with President-elect Muhammadu Buhari, yesterday, Anyaoku saw no reason to blame the Indonesian government for executing the Nigerians.

“The debacle in Indonesia is not a foreign policy issue, but an issue of the behavior of Nigerians. Nigerians will go to Indonesia and other countries like Malaysia, Thailand, they have a law that if u gets involved in drug promotion, the penalty is capital punishment.

“The president of Indonesia will tell you that every drug pusher is responsible for the ruination of 200 families and that’s why his country has taken that cue. So, it’s a matter of the behaviour of Nigerian citizens abroad, rather than foreign policy,” he said.

Briefing reporters on his meeting with Buhari, Anyaoku said: “I had useful discussions with the president-elect, congratulated him on his victory and told him he is coming in as president with a very high wave of expectations throughout the country.”