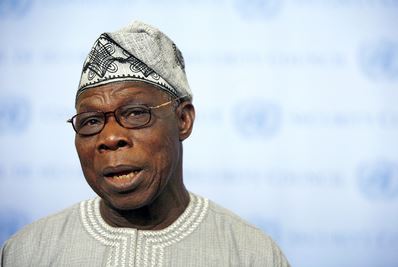 While two-time Nigeria leader Olusegun Obasanjo has often appeared to many Nigerians to be insincere about combating corruption in the country, proof of his corrupt activities has been hard to find.

A new video obtained by SaharaReporters, which features Anne Welsh, the CEO of the Obasanjo Foundation in London, suggests she has operated a well-oiled money-laundering scheme for many years.

Anne Welsh, a former investment banker, apparently met former president Olusegun Obasanjo during a Brussels conference in 2011 when Anne was the Chairperson of Sickle Cell Society. At the event, he befriended her and encouraged her to begin to do some work with Africa.

In the video, discreetly shot by one of the participants in the meeting in the United Kingdom in December 2014, Ms. Welsh is involved in a $4.9 million scheme to exploit the Ebola Virus Disease tragedy in West Africa through helping a group of “Lebanese businessmen” who wished to donate money to the Obasanjo Foundation for some work in Sierra Leone.

The group explains it would make the donation on one condition: the Obasanjo Foundation would get $2m, as long as it helps launder the balance of $2.9m.

Not a problem, Ms. Welsh tells the potential contributors, explaining she was well-grounded in the fine art of management stealth: “I had to go through training, through president Obasanjo, political training for one year to become discreet,” she says.

She gives away a few more secrets about how the practice works: “Sometimes we get dollars from people who give money to our foundation and they say they don’t want it to be known that they donated the money but they want to have a letter on like our letter-headed paper and a letter from Obasanjo stating just to say ‘Thank you for your kind donations to the foundation for the work to support Ebola’. That’s it. That is what we normally do.”

As the discussion proceeds, her interlocutors tell her they do not really care how the money given to the foundation is [actually] spent, as long as their interest is protected. They move on to discuss the percentage of the $2.9 that would come to Ms. Welsh, personally.

“At least 30%, think about the hard work I’m going to put into this, you will be so grateful to me,” she proposes.

The agreement is reached. Ms. Welsh would get the 30%, (totaling $900,000) in exchange for writing a letter thanking the Lebanese community for its donation towards fighting Ebola.

How is the transfer of the money to be done? Ms. Welsh explains that she basically uses GTBank in Nigeria because it is easy to manipulate the banks in Nigeria while in the United Kingdom she cannot transfer the dubious funds to anyone.

She provides further guarantees: “Immediately it hits my account it gets to you [you get yours] right away. And I need the account details you want me to transfer it to. Is it a Geneva account?”

Ms. Welsh further explains her operational method. “…That’s why I’m in Nigeria on the 26th so that I can seat at the bank while I do the transfer back to your account, it’s a good coincidence because in Nigeria I don’t trust the bank I will rather be there.”

Asked by one of her interlocutors whether she has handled this kind of business before, Ms. Welsh confirms she has done it more than once.

“I’ve done this before, I have even done it from the Nigerian end and London end. I just want to make sure that whoever’s account I send it to is able to receive bulk transfers.”

She assures the man: “You are not the first and you will not be the last.”

Apparently quite pleased at making nearly $1m from just a few minutes’ meeting, Obasanjo’s CEO, who stresses that she has “a very good reputation” she must protect, becomes loquacious and provides a quick autobiography.

“My life started out slow and it picked up, and I’m going to pray to God it stays high, just look at it, I just met you guys. I’m a firm believer that the people that are good around me will always be around me. One question I get, “How do you work with President Obasanjo” because if you read about him you will see that he fought the war in Nigeria, he’s the guy all other leaders call up on for help, him and I are always travelling, last time we were in Ghana and this guy had a problem we had to help get money from Goodluck because he did not have enough money. We did so much secret things. Then Obasanjo said to me that the reason he’s doing all these things in front of me and with me is because he trusts me. First time I met him was in Brussels, he was giving a keynote address, and he said to me, ‘Come to Africa, and I was like “I’ve not been to that country since I left” and he said to me ‘Just come, I’ll get my wife to look after you.’ I wasn’t sure but something in my mind said it was alright, I asked my mum, I did my research just like how you did your research on me, I did my research on him. So I said to myself, ‘Ann you’ve lived in Nigeria, the worst that could happen is you dying’.”

By “this guy” she was referring to Ghanaian leader John Mahama. By “Goodluck” she meant outgoing Nigerian leader, Mr. Jonathan.

Translation: Mr. Mahama desperately—and apparently personally—needed funds, and Obasanjo somehow obtained it for him from Mr. Jonathan. It is unclear at what time that event took place or why. Those details are critical because in 2013 and 2014, Obasanjo was at war with Mr. Jonathan, reportedly over corruption and incompetence. It was in December 2013 that Obasanjo wrote his famous letter to Jonathan.

In his new autobiography, “My Watch” Obasanjo said of Mr. Jonathan among many other blistering comments: “In the area of corruption, we have been going back steadily from the inception of Yar’Adua’s administration when the ‘hunter’ became the ‘hunted’. Under Jonathan we seem to have gone from frying pan to fire. If in the past corruption was in the corridors of power, it would seem now to be in the sitting room, dining room and bedroom of power.”

It is also of great interest that Mr. Mahama took office as President of Ghana in July 2012, suggesting that unless Obasanjo took advantage of his quarrels with Jonathan in 2013 and 2014 for financial gain, it could only have been in the second half of 2012 that he was on sufficiently-happy terms with Jonathan to have asked him for money for the Ghanaian leader.

SaharaReporters reached out to Ms. Welsh so she could narrate the context of the meeting at which the audiotape was made. She confirmed details of the meeting, stating that she was indeed present, but denied that any wrongdoing took place. She also confirmed to SaharaReporters that she clearly stated her name over the course of the meeting. She naturally did not comment on any of the “so much secret things” she admitted she has done with Obasanjo.

Also contacted, representatives for Obasanjo told SaharaReporters that the Obasanjo Foundation has copies of its audited accounts from 2012 and 2013, and that they are finalizing the 2014 audit. They insisted that they could account for all transactions and the use of their funds. They offered SaharaReporters copies of those older reports for review.