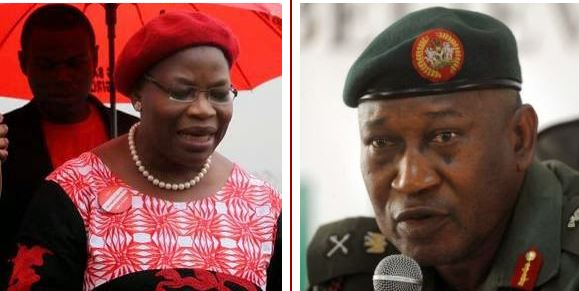 Former Minister of Education, Dr Oby Ezekwesili and other key members of the Bring Back Our Girls Group have responded to the letter by Defence Spokesperson, Gen Chris Olukolade in which he accused them of engaging in hate campaign against him and the military.

In its response dated May 19th, the group stressed that it was only demanding the military to find the missing Chibok girls and is in no way engaging in any hate campaign against them. The group stated that no single individual determines the direction of the group as their decisions is based on a collective ideology. The letter reads in part…see it below…

“We acknowledge receipt of your correspondence dated 14 May 2015 and noted your concerns about our advocacy movement #BringBackOurGirls which has since April 30, 2014 been advocating for rescue of the 219 #ChibokGirls abducted 400 days ago at their school on April 14, 2014. We especially noted  the following four key messages in your letter to our Movement. We wish to respond to the four key issues raised in your letter as follows: Our #BringBackOurGirls movement is a Citizens- led movement with open membership of all citizens who choose to identify with the cause of our 219 #ChibokGirls. No one individual or group of persons within the Movement can determine the direction or position of our Movement on the issues we advocate.

This is because, the basis of all our decisions is Collectivism. Moreover, both our Movement and our members are guided by a set of Core Values of Hope, Unity, Motivation, Affability, Nationalism, Integrity, Transparency, Empathy, Equity, Discipline and Sacrifice (HUMANITEEDS)  in our advocacy. In our public and private communication, we are also guided by our rule of highest respect for adherence to the sanctity of facts or empirical evidence rather than anecdotes. Our communications- statements, briefs, member representations – all pass through one of the strongest internal quality control process  to ensure accuracy in our messages.

Therefore, we wish to strongly assure you that #BringBackOurGirls has never and will never be susceptible to the kind of influence of any one or group of individual(s) engaging in a “hate campaign against you or our military”. Such act would contradict our Core Values and our strictly empirical advocacy for the Government and military to deliver on their duty. Thus, our singularity of purpose remains the rescue of our #ChibokGirls and all other abducted victims of the North East terrorist scourge. We shall continue to be civil and professional in our advocacy as we have widely been acclaimed to be since it commenced more than a year ago.

As a Citizens’ movement, #BringBackOurGirls is a demand for accountability from especially our Federal Government which has the constitutional duty for security of all citizens. In shaping our demand, we rely on publicly available news from your Directorate as well as all known credible media platforms. In furtherance of our civic duty to be eternally vigilant we launched our Accountability Tools for rigorously monitoring, organizing and analyzing all news reports on the counter insurgency war in order to draw out key issues on which we could engage as citizens with our Government to help improve the prospects of success of the military efforts.

As earlier stated be reassured that all our statements and posts on social media conveying the results of our Monitoring/Accountability Initiatives have to undergo stringent quality control processes. It is after these that they are released with utmost sense of responsibility and a readiness to defend our position with evidence. We therefore stand by all our analyses and assessments as conveyed in our statements. This explains why, so far, we have never had to recant, deny, or apologize for any statements we have made in the more than one year of our advocacy. Nevertheless, we are open to receiving any specific instances or episodes of factual inaccuracy resulting from our monitoring, analysis, assessment, questions, scrutiny and statements.

We also recall our meeting of the 6th May 2014 with you and the Chief of Defense Staff team at the Defense Head Quarters. We had at that meeting agreed that the military will act in ways consistent with civil-military relations and democratic accountability by hosting us to a regular meetings to discuss the progress of your rescue mission for our girls and more broadly, the prosecution of the counter-insurgency war. It is regrettable that subsequently following that agreement, none of such meetings ever happened again and that instead, our attempt to participate in your National Information Center briefings was frustrated and then prohibited.”the letter read.