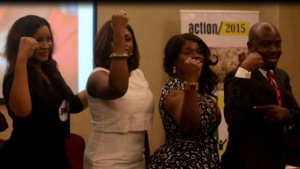 Omotola Jalade-Ekeinde has continued her new campaign and has now been joined by singers Waje and Yemi Alade to fight poverty among women around the world in a campaign, ‘Poverty Is Sexist’ propelled by ONE Organization.

The female celebrities have now gone on social media to push this campaign, the entertainers are using what they call a’strengthie’.

‘Strengthie’ features people across the globe taking selfies of themselves while flexing their arms in a notion to portray their strength and show solidarity for girls and women.