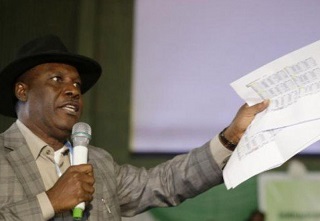 Elder Godsday Orubebe, who is a former Minister of Niger Delta Affairs but more famous for his embarrassing outburst during the last general elections, when he tried to disrupt the announcement of presidential election results at the National Collation Centre in Abuja, has rubbished reports that he will be ‘joining’ his folks in the All Progressives Congress.

The social media became agog when the Peoples Democratic Party chieftain and staunch loyalist of President Goodluck Jonathan purportedly announced via a Twitter account linked to him, @ElderGOrubebe that he has “concluded plans to join my folks in the APC to champion and sustain the movement for a better Niger Delta in the new administration”.

Dismissing the rumour as false, the ex-minister in a text message to PM News said “The reports are absolute nonsense. I am a believer of the PDP and I am with my Oga (boss) President Goodluck Jonathan. The reports online and on social media are totally false”.

In another reaction, this time in a telephone conversation with The PUNCH on Tuesday, Mr. Orubebe insisted that he was “a proud and committed member” of the PDP.

The former minister also threatened to sue online media houses that published the report of his purported defection to the APC without first contacting him.

He said, “It is not true that I am leaving the PDP for APC; it is not true and it cannot be true. I am taking online media, who have published the story to court.

“I am a core PDP member. I am with my oga (Goodluck Jonathan) and we are planning to reorganise the PDP to make it a party of unification”.