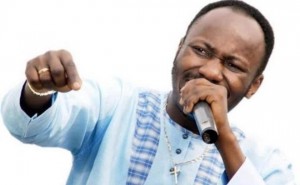 Apostle Johnson Suleiman, founder and President of Omega Fire Ministries in Auchi,Edo State said he was angry with President Goodluck Jonathan for allowing his wife to decimate the office of the Rivers State governor with impunity.

“It was unladylike! In fact, a woman has to be a lady, first, before becoming a ‘first lady’. But when my ‘son’ Governor Amaechi was using disparaging terms in his reaction to the President, I cautioned and reprimanded him. So, whoever becomes President must fist teach his wife to be a lady in the first instance before becoming a first-lady,” Suleiman told Vanguard in an interview.

The cleric who was a staunch supporter of Rivers State governor Rotimi Amaechi also claimed that although the governor had his support, he did not win re-election because in actual fact, none held in the state.

“There was no election in Rivers State but I know the will of God will stand in Rivers. My advice is that Governor Amaechi and Wike should not take their animosity to the extreme in the interest of the Rivers people,” he said.

“He saved his name by conceding defeat, he put the nation first. He wasn’t a loser. That has made him a force. Even though a few people are not happy but he saved a lot of lives by that. The rich would fly out of Nigeria if there is a crisis but the poor will die in the heat of it. And like I mentioned earlier, President Jonathan did the most honourable thing,” he said.

Asked whether he could run for any leadership position in future, Suleiman said it would be an insult, as he already led a congregation more in population than several nations.

“I am already the President of a ministry that has presence in over 42 nations of the world, with over 7 million direct followers. Is that not more than some nations of the world? I am content with my mandate to wipe out tears, restore people to their destinies by the revelation of the word, manifestation of power and reality of the Holy Spirit,” he said.