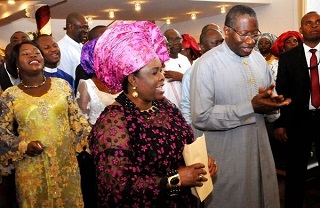 The First Lady, Dame Patience Jonathan, on Sunday revealed that she battled with another round of ill-health during the re-election campaigns of her husband, President Goodluck Jonathan.

Mrs Jonathan, who was flown abroad about two years ago for medical treatment, said the latest attack, which she attributed to the devil, was so severe that she had to be sneaked out of the country to Germany in January for a major surgery.

She spoke during a thanksgiving/farewell service organized in honour of the First Family at the Aso Villa Chapel.

Mrs Jonathan said before she left the German hospital after the operation, she was billed for another in a bigger hospital immediately after the elections but by divine providence, she was declared free of the health challenge.

Like her previous health challenge about two years ago, President Jonathan’s wife did not disclose the nature of the last ailment.

She said, “During the last campaign period, the devil struck again. I was in pain and was rushed to the hospital in January and the doctors told me, ‘mama, you have to go for a major operation now now’.

“What again? I asked. The campaign was still going on and I wondered how we were going to explain to Nigerians.

“You know that even when you go for medical check-up, they will be writing in newspapers, saying all sorts of things.

“I said my husband will continue with his campaign until the last day. That was how I went in for the first major operation (surgery) in the end of January.

“By God’s grace, I went for the operation (surgery) and came out. On my return from there,   I went straight to the campaign ground.

“They said to me when I was leaving the hospital: ‘mama, there is another bigger operation that you have to go in for again. This one will not be in this hospital. This hospital is too small for the type of operation you need when you come back. You have to go to a bigger hospital’.

“I said ‘ha! While will you tear my body again after I had done 12 operations within one month last year?

“I said my God will see me through because he created me for a purpose. I told my prayer partner to continue praying for me. I said to myself that I will never be used for a sacrifice.

“I was booked for the operation in a bigger hospital and I was asked to go back to Nigeria and return after the campaign. They gave me a date. When I went back, I paid for everything and just when I was to be taken into the theatre, the doctors said, ‘let’s check her again’.

“By then, my husband had lost the election. I had packed out of the Villa. Behold! I went to four hospitals again and the thing was said to have vanished. My doctors were surprised; they didn’t believe that that could happen”.

The first lady recalled that many people thought it had ended for her two years ago when she underwent 12 surgeries in a space of one month.

She said although she was “dead”, God sent her back to complete her work.

But the President’s wife added that her husband’s electoral loss was an indication to her that the assignment given to her by God had been completed.

She said, “I thank God for keeping me alive today. God is so wonderful. Just two years ago, I went through operations upon operations. Within one month, I passed through 12 operations.

“Some people said I was dead, yes, I was dead but God resurrected me.

“God told me, ‘my daughter, go back, I will give you a second chance, go and finish your work’.

“And since my husband lost the election, I believe God has made me to finish the work”.

Mrs. Jonathan said she would forever remain thankful to God because many people had prophesied that either she or the President would not leave the Presidential Villa alive.

She recalled that that was what happened in the case of Mrs. Stella Obasanjo, wife of former President Olusegun Obasanjo, who died while her husband was still in office.

She, however, expressed thanks that both she and Mr. Jonathan would be leaving the Villa on May 29 hale and hearty.

Mrs. Jonathan said she would continue to thank God for His mercies because she never dreamt of becoming the wife of a deputy governor much less, a President’s wife.

She   said, “I never thought in my life that I will be First Lady. I never dreamt of being the wife of a deputy governor because my husband was not a politician. But God made it possible and God lifted us up from deputy governorship position and here we are.

“We should be grateful to God for what he has done. To me and my family, we praise God.

“To our followers, today, it might not be too good but I want them to be grateful to God because they have followed us for a long time from deputy governor, governor, Vice President to President.

“You know that no position is for a life-time. There is no permanent thing so I want you to take it in good faith that it is the will of God. You should be praising God. God is really wonderful”.

The event was attended by several ministers, lawmakers and other public officials.