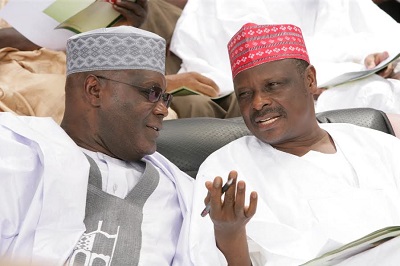 The Peoples Democratic Party, PDP, is reportedly not giving up on its moves to woo former Vice President Atiku Abubakar back to into the party.

To this end, the party is hoping to cash in on the former number two man’s undying presidential ambi­tion to get him back ahead of the 2019 elections.

According to a report by Saturday Sun, initial meet­ings on how to get Atiku back into the PDP fold have been held in Abuja where it was decided that to lure him, “the party’s 2019 presidential ticket will be placed before him”.

A source, who attended one of the meet­ings, disclosed that operation get Atiku back has been given to the PDP Board of Trustees, BoT Chairman, Chief Tony Anenih “who is very close to Turaki (Atiku’s traditional title) and main­tains a strong influence on him”.

Should Atiku decline the offer, the newspaper reported that outgoing Kano State Governor and Senator-elect, Dr. Rabiu Musa Kwankwaso, has been targeted as the next best option.

Asked why the PDP is unrelenting in its quest to get Ati­ku, who is currently a chieftain of the All Progressives Congress (APC) back to its fold, the source, who is a trusted associate of President Goodluck Jonathan, explained that the choice of the Turakin Adamawa “is because of his presidential ambition, which has come alive stronger soon after the victory of Gen Buhari at the polls, his deep pock­et, his nationwide network and ability to provide leadership for the PDP across the country”.

It was learnt that rather than let his hope dampen by the emergence of Gen. Muhammadu Buhari (retd.) as president-elect, feelers from the camp of the former vice president show that he has got more inspired to keep his aspira­tion alive.

“He’s a man who believes that if Buhari can get it at the fourth time, he can also become president if given another chance to contest the presidency in 2019”, a source close to the former VP stressed.

Atiku, who was VP to ex-President Oluse­gun Obasanjo for eight years on the platform of PDP, which he helped found, left the party to contest the presidency under the ban­ner of the then South West-based Action Congress (AC) in 2007. Soon after he lost the election to the late President Umaru Musa Yar’Adua of the PDP, he returned to the party but failed to secure the party’s presidential ticket again in 2011. When it became clear that the party had made up its mind to return President Jonathan unopposed, Atiku again moved to the main opposition party, APC, which he has constantly reassured, is his ‘last bus stop’.

His bid to pick the APC presidential ticket failed as he came a surprising third in the primaries held in Lagos.

“If Buhari got it at the fourth round, Ati­ku can also get it in his fourth attempt in 2019, that is why some of us in PDP be­lieve he’s central to our party’s comeback to power in the next general elections”, a PDP chieftain involved in the plot to get Atiku return to the party added.

“Should all entreaties to Atiku fail, which is 98 per cent unlikely, Kwankwaso will be another viable option because of his firm grip on Kano which has always produced the largest bulk votes in recent elections. Beside this, the Kano governor though now a Senator-elect equally enjoys wider acceptability across the country like Atiku. Don’t forget he came second in the APC presidential primary despite his late entrance into the race”, the source stressed.

Speaking on the move to woo Atiku back to the PDP, National Publicity Secretary of the party, Olisa Metuh, in a telephone chat with Sat­urday Sun, could neither confirm nor deny the plot.

“I can’t confirm that because there is nothing concrete to it”, he said. “But every genuine and well-meaning member of our party would want Atiku back. He is a great mobiliser. So, why not? At this time that we are down, he is a great asset and can be a rallying figure. I think every genuine PDP member would wel­come such a move”.