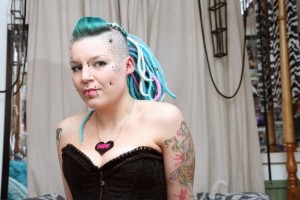 Torz Reynolds had been dating Stuart “Chopper” May for two years, and she was so loved-up that she had a tattoo featuring his name on her arm that said “Chopper’s Bitch”.  When he told her he was moving to Alaska to start a dream job, Torz did what any supportive girlfriend would do and saw him off at the airport in a tearful separation. Scoop reports:

But Torz discovered to her horror a week later that Chopper hadn’t left the country at all, and was allegedly back at his home in Tiptree, Essex.  Realising her relationship was well and truly finished, the 26-year old wanted rid of her name tattoo. 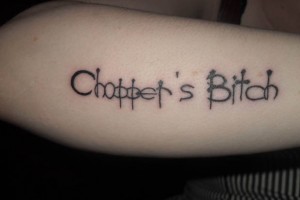 But rather than having it professionally removed by a laser or covered up with another inking, Torz used a SCALPEL to carefully cut the skin off her arm with the tattoo on it – using no anaesthetic and using only a bottle of Vasocaine numbing spray to halt the bleeding. After 90 minutes slicing, she then used a pair of dissection tweezers to peel the skin back and remove it completely.

And in a grim pre-Valentine’s Day gift, she stuffed the arm skin into a jar, wrapped it up with a bow and sent it via recorded delivery to her former lover, checking the status of the delivery so she would know for a fact that her 24-year-old ex had received it. 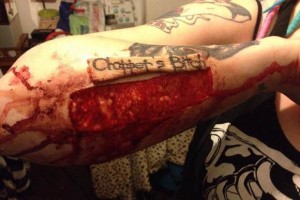