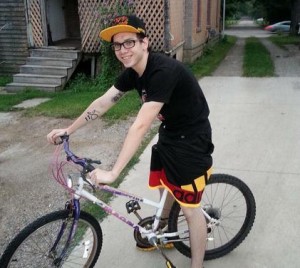 Talk of dedication to one’s job and being determined to deliver by any means necessary, a pizza delivery man in Louisville, Ky., was stabbed and robbed on Sunday. But he still delivered his pies. UPI reports:

Josh Lewis, a 25-year-old college student, was delivering Spinelli’s pizzas to Norton Hospital when he was allegedly stabbed in the back and robbed.

Lewis managed to carry his pizzas to the emergency room before collapsing. Spinelli’s regional manager Willow Rouben praised Lewis’ commitment to his work. “He just walked in there, said ‘Hi, I’m from Spinelli’s. I have a pizza delivery,’ and then just collapsed. That’s dedication,” Rouben told the Courier-Journal.

Rouben said Lewis is recovering from surgery to fix his collapsed lung.

Originally from Detroit, Lewis is studying Christian ministry at Boyce College in Louisville. His employers and friends are holding a fundraiser for Lewis and his family.