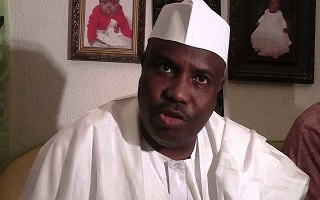 Speaker of the House of Representatives, Aminu Tambuwal, has tasked elected officials on the need to concentrate on issues of governance rather than bicker on the politicking of the last elections.

Mr. Tambuwal, who was elected Sokoto State governor in the April 11 general election on the platform of the All Progressives Congress, APC, stated this in Yola on Sunday when he paid a courtesy call on the Adamawa State Governor, Bala Ngilari.

“We are done with politicking and now is time for governance”, the Speaker said. “What Nigerians are yearning for is good governance and that is why they have elected us”.

“I am calling on those who emerged victorious at the last polls to face governance and stop politicking.

“They should be honest and dedicated to the mandate which the people gave to them.

“They should always consult with the public to avoid unnecessary conflict”.

The Speaker also visited the Lamido of Adamawa, His Royal Highness, Dr. Muhammadu Barkindo Mustapha, for bestowing on him the traditional title of “Wakilin Raya kasan Adamawa”.

Responding, Mr. Ngilari commended Mr. Tambuwal for leading the House without rancour saying Nigerians should remain grateful to the Speaker for his contributions towards democratic governance in Nigeria.