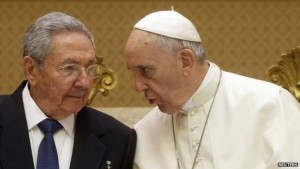 Cuban President, Raul Castro has said he was so impressed by a Vatican audience with Pope Francis that he might return to the faith he was born into. Mr Castro praised the pontiff’s wisdom, adding: “I will resume praying and turn to the Church again if the Pope continues in this vein.” BBC reports:

He thanked the Pope for brokering a rapprochement between Cuba and the US. The communist leader had stopped at the Vatican after attending Russia’s World War Two Victory Day in Moscow. The Catholic Church has maintained ties with Havana since the 1959 revolution.

The Pope will visit Cuba on his way to the US in September. For Pope Francis, the restoration of relations between the US and Cuba – agreed during secret talks at the Vatican – has been a major diplomatic achievement, says the BBC’s David Willey in Rome.

The US had imposed a trade embargo after Cuba’s revolution, which it began to lift late last year. After the 50-minute private audience on Sunday, Mr Castro told reporters: “The pontiff is a Jesuit, and I, in some way, am too. I studied at Jesuit schools.”