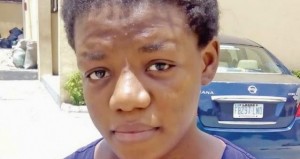 A Pregnant Woman Killed her Ijaw Husband Over 100 Naira In Ajegunle Lagos….According to reports , the pregnant woman who stayed in the Ajegunle area of Lagos State, Gift Wa­hab, accused of killing her husband, John Amazu, has been remanded in prison custody by a Magistrate Court sitting in Ebute-Metta, Lagos.  Wahab was alleged to have ended the life of Amazu about 10pm on Thursday, March 19, 2015 by stabbing him in the neck during a scuffle over N100 meant for pur­chase of food. Street Gist has more:

Until the unfortunate incident, 28-year-old Amazu, an Ijaw man and indigene of Delta State resided with Wahab, 20, a native of Ishan, Edo State at 24 Fasasi Street, Aje­gunle, Lagos. Recalling what happened that night, Wahab said: “It happened around 10pm, and I could not even see clearly the severity of the wound he sustained. If only I had known it was going to result to this, I would have left the house for him that night.”

“We both went out that night and before we left, he had taken some alcohol. On our way back, I asked him to give me the key to the house so I could go home fast and rest be­cause I was seriously tired, but he refused. I asked why, and he said because he was very hungry and had no money on him. I told him that we would manage the only N100 I had with me for the night and look up to God on how to sur­vive the next day. He just turned it into something else and said I should never dare talk about that again. The next minute, he started beating me and stabbed me in the nose with an object I still don’t know and ran away, leaving me bleeding and in pain.

“A man who saw me by the road­side gave me his handkerchief to press on my nose to stop the bleed­ing because it was much. The man advised me to go home and possi­bly use a hammer or any metal to break the lock.

“That same night, when he came back, he began beating me again. I am a woman and I don’t have the power to fight him. At a point, I don’t know when I got a knife and stabbed him with it.”

When Sunday Sun inquired whether they had any quarrel pre­viously, Wahab acknowledged that they had a long history of bickering and fighting. She said: “We always fought to the extent that the land­lord once warned that if we ever fight again, he would give us quit notice. From that day, we tried to keep our quarrels as quiet as pos­sible. We just resorted to merely insulting each other in the room so that the landlord won’t find out. I never knew when I stabbed him. He saw me holding the kitchen knife and when I unconsciously stabbed him, he did not give up immediate­ly. It was when I raised the alarm that he crawled beside a gutter and died there.”