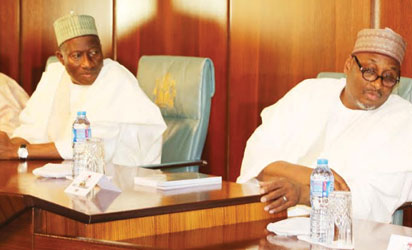 The Presidency has invited some key members of the Peoples Democratic Party Board of Trustees, National Working Committee and Elders Caucus to a meeting scheduled for Wednesday in Abuja aimed at finding solutions to the protracted crisis in the party.

A BoT member and former Deputy National Chairman of the PDP, Chief Olabode George, confirmed the development on Tuesday in a chat with The PUNCH on Tuesday.

The invitation, it was learnt, was extended to two leaders from each of the six geo-political zones of the country.

However, a top member of the party from the South-West clarified that the meeting was not summoned by the Presidency but by the BoT Chairman, Chief Tony Anenih.

George said, “I have no idea how we were picked for the meeting. If a person has a serious ailment, he will require a serious surgery and that is what we want to do. The party must hold a closed-door meeting. We cannot deceive ourselves and we must be factual to ourselves. It is at that meeting that we will reason together.

“The meeting is critical because time is going. If we leave issues until after May 29, nobody will show up for any meeting. It is not a matter of a witch-hunt. The important thing is to reposition the party. If there are strong arguments to sustain and retain anybody, we will accept.

“But they cannot say we should not meet. This will be the first meeting since the elections. Mu’azu is the one that should have convened the meeting but he is not around. We are just hearing all sorts of things”.

A top PDP chief alleged that invitations were sent only to the BoT board members with the resignation of the party’s National Chairman, Adamu Mu’azu, the main agenda.

He said, “I learnt that Chief Anenih secretly called an emergency meeting of some selected BoT members. I don’t know why it was George and Adeojo that were chosen from the South-West. I hope they are not planning to destroy our party.

“If they want to remove Mu’azu, is this the way to go about it? I know that those that were invited are desperate to have our national chairman out of the way. But I can assure you that their decisions will not be binding on us as members of the BoT”.