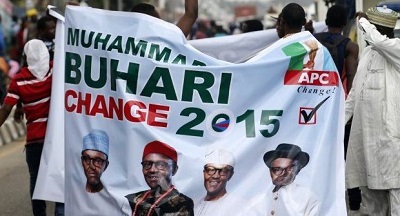 Supporters of General Muhammadu Buhari (retd.), under the aegis of the Buhari Global Support Group, have urged the President-elect to resist the temptation of letting partisan considerations dictate the choice of his cabinet members.

Coordinator of the group, Mr. Aja Aja, made the call at a media briefing in Abuja on Sunday.

The group said the spirit of sportsmanship exhibited by President Goodluck Jonathan in conceding defeat had provided the much needed balm to heal political wounds and the building of a stronger nation founded on tolerance and unity.

According to the group, now that the elections are over, “we must take advantage of the window of opportunity to consolidate national integration by constituting a government of technocrats and proven administrators beyond the narrow compass of partisan considerations”.

Aja said, “Experience, credibility and creativity must be the minimum qualifications for public service as Nigerians cannot wait to harvest from the change the incoming government symbolises.

“We must harness and utilise the talents we have in abundance and must never again allow the strictures of age, tribe or religion to impede our march to greatness.

“It is time to deploy the considerable acumen of our massive human capital towards meeting our equally intimidating national challenges.

“It is appropriate to remind all that winning an election is the easier part of the job; delivering on the mandate is the crux of participatory democracy”.

The group noted that while it was true that Buhari was considered the arrowhead of the campaign for a new Nigeria, it enjoined Nigerians to take ownership of the crusade for national rebirth.

It also tasked the incoming administration on the need to ensure that it delivers on its campaign promises, especially with respect to openness and transparency in the conduct of government business.

Aja said, “We believe that he will do it. There are no two ways about it. He would do it. Of course, not only him, we should also insist that whoever he is going to work with must declare his assets.

“Although it might be academic all this while, declaration of assets has a very good role it plays. Some people over-declare in anticipation of what they are going to get. It is not just declaring but to make it public. Let them make what they declare public and we will now, by the virtue of Freedom of Information Act, go into investigation.

“If you say you have N1m, what is your tax profile like? First of all, have you been paying your taxes or you just made bogus declaration in anticipation of what you are going to make? And if you under-declare, by four years’ time, we will see.

“So, that must be part of this government. They must declare openly. We must know how much you are worth”.