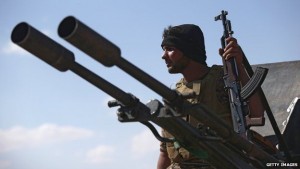 Iraq’s government has called for volunteers to fight against Islamic State and help retake the city of Ramadi. A cabinet statement said a voluntary recruitment drive was necessary to fill shortages in squads in the west of Anbar province. BBC reports:

Thousands have fled Ramadi since its capture by IS on Sunday. Meanwhile, the US National Security Council said it was considering “how best to support local ground forces”.

Spokesman Alistair Baskey told AFP that some of the measures may include “accelerating the training and equipping of local tribes and supporting an Iraqi-led operation to retake Ramadi”. A more detailed announcement could come within days.

President Barack Obama has been briefed by advisers and “reaffirmed the strong US support” for Iraqi Prime Minister Haider al-Abadi.