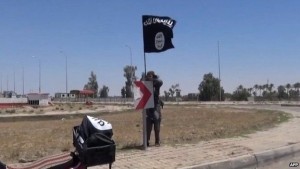 Islamic State militants are preparing to defend the Iraqi city of Ramadi, witnesses say, as Iranian-backed militiamen gather east of the city. Residents said IS fighters had set up defensive positions and laid landmines after capturing the city on Sunday. BBC has more:

Militants were also going door-to-door looking for government sympathisers and throwing bodies in the Euphrates river, residents were quoted as saying. Thousands have fled the city and the UN has warned of a humanitarian crisis. It says some 25,000 people have left the city, only 105km (65 miles) west of Baghdad, in recent days, adding to a flood of people already displaced from the area. Many were sleeping in the open.

The UN says it is trying to meet the needs of those displaced, but funds are low and its stocks have almost gone. The loss of Ramadi, the capital of the western Anbar province, is a blow for both the Iraqi government and US strategy in the area, says the BBC’s Jim Muir in Beirut.

Retaking it is a massive challenge to the Iraqi government, which has had to appeal to the Shia militias despite risks of a sectarian backlash from sending them deep into the Sunni heartland, our correspondent adds. Police and the military made a chaotic retreat from the city, which has been contested for months, after days of intense fighting.