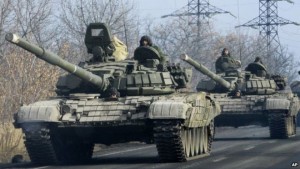 An investigation by Russian opposition activists has concluded that 220 Russian soldiers died in two major battles in eastern Ukraine. The report includes data compiled by the opposition politician Boris Nemtsov, who was shot dead in February. BBC has more:

Russia denies Western accusations that it has sent regular troops and armour to help the rebels in eastern Ukraine. The cost of Russia’s military involvement and of annexing Crimea is said to run into billions of dollars. The 64-page report, called Putin – War, has been published on the Open Russia news website.

At a news conference in Moscow Ilya Yashin, an ally of Boris Nemtsov who finalised the report, said it was the work of “true patriots” who opposed the “isolationist policies of [President] Vladimir Putin”. It details how 150 Russian soldiers were killed in the key battle for Ilovaisk, a small town in the Donetsk region, in August 2014.

More recently, it says, 70 Russian soldiers died in the battle for Debaltseve, which fell to pro-Russian rebels in February, after the Minsk ceasefire deal was signed. “All key successes of the separatists were secured by the Russian army units,” Mr Yashin said. The question of Russian involvement in Ukraine is highly sensitive in Moscow. The activists said that finding a company prepared to print the document had been difficult.