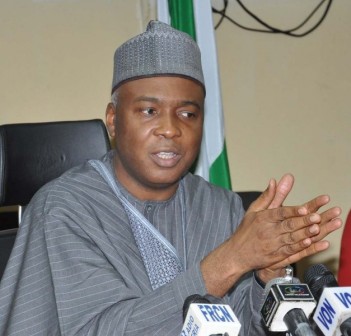 The Chairman of Irepodun Local Government Area of Kwara, Alhaji Luqman Owolewa, has joined other Nigerians to give support to Sen. Bukola Saraki’s senate president bid.

Owolewa, in a statement made available to the News Agency of Nigeria (NAN) in Omu-Aran on Sunday, said that Saraki’s aspiration deserves the full support of Nigerians.

According to him, Saraki possesses wealth of political experience to occupy the exotic seat of the senate presidency.

“His ability to secure victory for his party in Kwara State in the last general elections is a good pointer to his capability to steer the ship of the 8th Senatorial Assembly successfully.

“His contribution to the unity, growth and success of his party, at the local and national level, cannot be over emphasized”, he said.

Owolewa said that Saraki had by his dedication and promotion of the party’s core values, showed his capability to bring about the desired change devoid of rancour and acrimony.

“It is on good record that elections into all the elective offices were all convincingly won by the APC in Kwara state.

“This is a feat that clearly demonstrates Saraki’s wide acceptance and popularity among the people he has chosen to represent.

“He is a former state governor, a former chairman of the Governor’s Forum, the incumbent Chairman of the senate Committee on Ecology and has been re-elected for another term in the Senate.

“He is no doubt the most qualified and experienced to occupy the seat of the senate president.

“I believe he deserves the full support of party supporters, party leaders, senators-elect and the generality of Nigerians to occupy the seat”, Owolewa said.

According to him, Saraki’s tenure as senate president, if given the chance, would definitely help to foster the needed change, peace, effective synergy and socio-economic development of the country.

He described the seat of the senate president as very crucial life wire of entrenching true democratic governance, especially at this critical period of the country’s life.

“It is within this context that a highly detribalised and politically inclined Nigerian with high integrity, such as Sen. Bukola Saraki, is needed to drive the senate’s affairs effectively”, Owolewa said. (NAN)