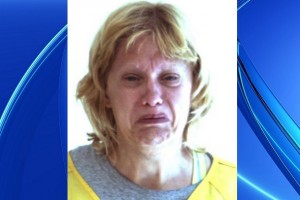 A woman was arrested after she attempted to pull her elderly lover’s pants down to cut his private parts off with a hacksaw.  Bonnie Treaster, 46, of Pennsylvania, hurt her lover in a fit of jealous rage. Scoop has more:

She is accused of slicing to the groin of her 82-year-old boyfriend with a hacksaw, Police said. Treaster, who lives in Centre Hall, was charged with assaulting an elderly person after he was taken to the Mount Nittany Medical Center on Friday.

At the hospital, the elderly man claimed that an intruder had entered his home and assaulted him before fleeing, and leaving him bleeding from the groin. The man later changed the story, saying that his much younger girlfriend cut him in a fit of jealous rage.

Police said that Treaster used a household object and a model airplane to hurt the man. When he attempted to escape, she chased him to the garage of the house, where she continued to abuse him.  He finally managed to escape before going to the hospital for treatment.

The man told police that he and Treaster decided to tell the story of him being hurt by an unknown assailant while riding to the hospital. Treaster was arrested and her bail was set at $75,000.