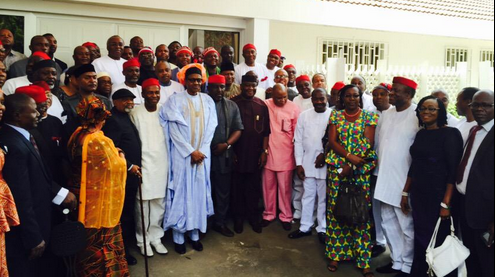 Leaders of the Southeast caucus of the All Progressives Congress (APC) Thursday requested President-elect Muhammadu Buhari to give the Secretary to the Government of the Federation (SGF) slot to the Igbo.

In addition, they urged Buhari to make the zone’s aspiration of producing the Speaker of the House of Representatives or its deputy, a reality.

The Igbo leaders stated this when they met with the president-elect at the Defence House in Abuja.

They were led to the parley by Imo State Governor, Rochas Okorocha, who is the only governor elected on the ticket of the APC in the zone.

They also presented a former Governor of the old Abia State and one-time Chairman of the All Nigeria Peoples Party (ANPP), Dr.Ogbonnaya Onu, as their leader. He could be considered for appointment as SGF, they told Gen. Buhari.

Speaking on behalf of the delegation, which included federal lawmakers and national officers from the zone, Gov. Okorocha said even though they were not able to deliver the entire Southeast votes to Gen. Buhari, they cut down considerably the dominance of the PDP in the zone.

Okorocha, who expressed confidence in the success of the Buhari administration, said: “We know that we’ve lost out in the position of senate presidency because we did not have a ranking senator elected to the National Assembly. We however appeal and we believe that you will be generous enough to consider the Southeast region to be considered for the position of the SGF”.

He told the president-elect that the zone had unanimously agreed that the ex-ANPP chairman should be elevated and recognised as the leader of the party in the Southeast.

He said having produced three members of the House of Representatives, the Southeast should also not be left out in the scheme of things in the leadership of the House

“We (Southeast APC) are more victorious than you are on your victory at the presidential election, many of us would have gone on exile if you had lost”, he pointed out.

Speaking with reporters shortly after the meeting, Okorocha said: “We are here on a courtesy call; first to congratulate the President-elect for a well-deserved victory and to reassure him that the Southeast will be behind him and to pray for God’s wisdom and health to enabling him carry out the task of governance in Nigeria.

“The Southeast played a very key role in the victory of General Muhammadu Buhari, considering what happened in 2011 when the PDP returned about 7 million votes, but this time around it’s no longer possible. In the next dispensation, the entire Southeast will be APC”, he boasted.

On their demands, the re-elected Imo State Chief Executive said: “We know that the President-elect, General Muhammadu Buhari is a fair person. He is a man who believe in justice, equity and fair play. The Southeast is one of the tripods upon which this nation stands and we believe that what is good for A is also good for B, it is not a specific thing but we know that Southeast will not be left out in the political equation of Nigeria in terms of distribution of infrastructure and the federal appointments”.

He dismissed claims that the position zoned to the Southeast was already generating a crisis among the leaders. “As it is now no position has been zoned to anyone. A committee has been set up to review the entire zoning thing; there has not been any zoning at all”.

Earlier, Gen. Buhari praised the delegation for their doggedness, pointing out that both Okorocha, Rivers State Governor Rotimi Chibuike Amaechi and Edo State Governor Adams Oshiomhole stood still and fought against impunity in the Southsouth and the Southeast.

He said that he had already asked the governors to document their experiences, especially how security agents prevented the use of card readers during the elections, warning that all those found to have participated in electoral manipulations will be brought to book.

Gen. Buhari thanked the Southeast APC for the role it played in ensuring that it reduced the deficit of votes the PDP gathered in the region and assured that his administration will carry everyone along, irrespective of race, region and tribe.