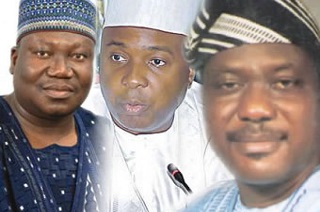 As the national leadership of All Progressives Congress deliberates on zoning of political offices, the Benue State Forum of Imams and Ulamas yesterday appealed to Senator Bukola Saraki and other senators eyeing the position of Senate President in the coming 8th Assembly to step down for Senator George Akume.

Senators George, Saraki, Abdullahi Adamu, Ali Ndume, Danjuma Goje and Ahmad Lawan are all lobbying their colleagues for the nation’s number three position with the APC yet to take a stand on where it would zone the position.

In a statement signed by chairman of the forum, Sheikh Dangiwa Suleiman, the imams noted that Akume, who is a two-term governor of Benu State, should be given a chance in the interest of peace, justice, fair play and unity of the country.

“Senator Akume is the most qualified person for the position having garnered enough experience as a two-term governor and a ranking senator in the National Assembly”, the statement reads in part.

The forum further contended that Akume represents the link between the North and the South, adding that it has become imperative for the North-central to produce the Senate President and that Akume, though a Christian from the zone, deserves it more than any other person.