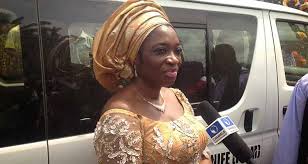 The Senator-elect for Anambra Central Senatorial District, Uche Ekwunife, on Thursday revealed how she has come under intense pressure from some Igbo leaders, to renounce her mandate for Senator Chris Ngige, who also hails from the district.

Ekwunife won the March 28 senatorial election in the district on the platform of the Peoples Democratic Party.

Ekwunife, who is presently a member of the House of Representatives, told journalists in Abuja that since the Independent National Electoral Commission, INEC, declared her winner, she had been under pressure to renounce the mandate for Ngige, who was tipped to emerge Senate President had he won re-election to the red chamber.

With Ngige’s defeat at the polls, the South-East lost the golden opportunity to produce the Senate President in the coming 8th legislative assembly as no ranking senator from the zone is in the APC, which is the majority party in both chambers of the National Assembly.

Ekwunife, however, vowed never to succumb to the elders pressure as the peoples mandate was more important to her than any political office.

She said, “Yes, there has been immense pressure from various quarters in the Anambra Central Senatorial zone and by extension, Anambra State, on me to renounce the popular mandate given to me by the people of the senatorial district for somebody (Ngige) I defeated flatly for reasons of power sharing they are not even sure of.

“Even if they are sure of whatever position they want the person they are pressurising me to step down for, I will never take that from them because the mandate, as far as I am concerned, is far, far bigger than being sacrificed on the altar of power sharing”.