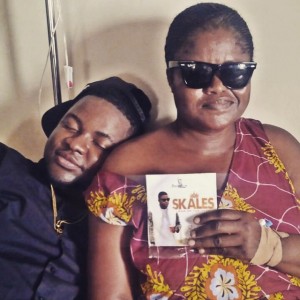 Skales has had a very good year and has actually climbed to the top where the big names are.

The pop star’s mother might be ill and receiving treatment in a hospital, but that didn’t stop Skales from giving her his first ever album after more than 5 years in the music industry.

He wrote “Came to deliver my 1st ever debut album to my mother the queen her royal highness who is currently not too strong but is still kickin butt…she’s my everything !!! Love her so much I made her proud that’s all that matters #mymumistookoolforsickness #manoftheyearalbum #motyconcert #motyseason”