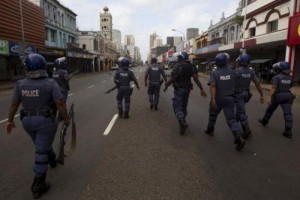 The police moved in after residents barricaded streets in Johannesburg’s sprawling township of Soweto with large rocks to show their grievance over a new payment system they say has sent electricity costs soaring.

Police were not immediately available for comment. Soweto is home to some 1.5 million people who, between them, owe cash-strapped Eskom nearly 4 billion rand in unpaid bills.

The company, which supplies the bulk of power in Africa’s most advanced economy, is struggling to meet demand due to a lack of maintenance on its aging stations, and has implemented rolling blackouts to avoid overwhelming the grid.

South Africa has seen a wave of often violent protests in the last few years by residents in mainly black townships who say the ANC government has not done much to improve basic services since the end of white minority rule two decades ago.