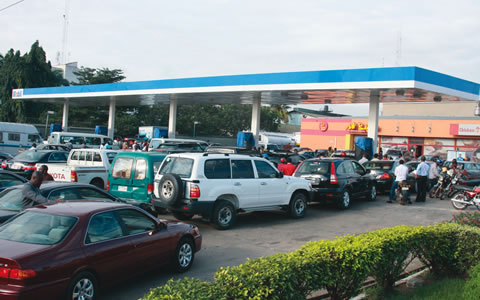 An amicable resolution to the fuel scarcity problem, which has been biting hard in most parts of the country for some weeks now seems to have been reached following a meeting between Federal Government officials and Major Oil Marketers Association of Nigeria on Monday.

The meeting, presided over by the Minister of Finance, Dr Ngozi Omonjo-Iweala, at the Ministry’s headquarters in Abuja, ended over four hours later with an assurance that the fuel scarcity would be over within the next few days.

It was also resolved at the meeting, which was attended by representatives of MOMAN and some senior officials in the finance ministry that outstanding subsidy claims would be paid even after a new government mounts the saddle on May 29.

Speaking with journalists after emerging from the meeting, Okonjo-Iweala, who was in company with the Executive Secretary, MOMAN, Mr. Thomas Olawore, said the grey areas which resulted in the scarcity have been ironed out.

She said based on the discussions at the meeting, the Federal Government and the oil marketers saw the urgent need to bring an end to the fuel scarcity problem.

The minister added, “We have appealed to them (oil marketers) and you have heard them saying, following the payment of the N154bn, things will ease off.

“We’ve spent a considerable time talking about this and we welcome the news that have been announced by the marketers and we thank them.

“On our own side, we have discussed the issues they have put on the table and we are looking into them, government is a continuum and you find out that whatever the issues are, they would be resolved so that Nigerians will not suffer”.

When asked how the controversy surrounding the actual outstanding subsidy arrears, being owed the marketers was resolved, the minister said it would be difficult to get the exact debt owing to what she described as the “rolling” nature of the business.

Mrs. Okonjo-Iweala, however, said with the understanding reached with the marketers, all the outstanding debts owed would be paid based on claims processed by Petroleum Pricing Products Regulatory Agency

The minister said, “What I want you to understand is that this is a rolling business and there is no one definitive figure”.