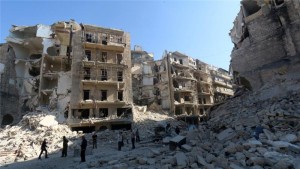 A series of barrel bombs dropped by Syria’s government has killed at least 75 people and wounded dozens others in Aleppo province, according to medical sources and a monitoring group. The deaths occurred in two separate incidents on Saturday when helicopters dropped explosives-filled barrels, which are deemed illegal under international law. Aljazeera reports:

One barrel bomb hit the rebel-held Shaar neighbourhood of the city of Aleppo, killing at least 20 people, most of them from the same family, local activists have told Al Jazeera. In the second attack, at least 55 people were killed after bombs hit a busy market in al-Bab city – about 40km northeast of Aleppo city, which is controlled by the Islamic State of Iraq and the Levant (ISIL).

The Syrian Observatory for Human Rights, which documents violence through a network of activists on the ground, dubbed the al-Bab attack as a “massacre”, adding that the number of dead likely would rise because many of the wounded were in critical condition.

This comes a day after rebel fighters seized the last government-controlled town in the country’s northwestern province of Idlib after government forces retreated to their coastal bases, according to activists and a monitoring group. A Syrian coalition known as the Fattah Army seized the town of Ariha on Thursday, giving the group full control of Idlib province.

The Fattah Army is made up of several armed groups, notably the Nusra Front. Hadi al-Abdallah, a Syrian activist reporting from Ariha, told Al Jazeera that dozens of Syrian soldiers were killed in the clashes.