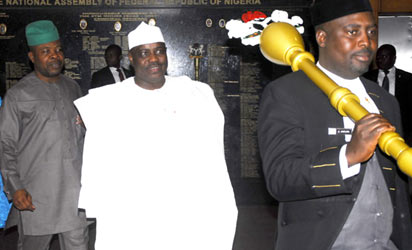 Deputy Speaker of the House of Representatives, Emeka Ihedioha, will continue presiding over the affairs of the House after May 29 as the substantive Speaker, as Aminu Waziri Tambuwal, steps down to take oath of office as elected Governor of Sokoto State.

This position was disclosed by Tambuwal, who said it was the result of series of technical meetings the lawmakers held on the matter, which according to him, was not envisaged by the constitution.

Tambuwal will cease to be a member of the House by May 29 when he takes oath as governor of his home state of Sokoto, a week before the tenure of the lawmakers expires.

Following Tambuwal’s election as governor-elect, the office of speaker would become vacant though the House would continue until June 4th, before the inauguration of new members on June 6.

The outgoing Speaker said during an interaction with the House Press Corps at the National Assembly that while the Nigerian constitution was silent on the matter, the standing House Rules said a new Speaker ought to have been elected when the Speaker or his deputy cease to hold the position by May 29.

“I will cease to be member of the House by May 29, which means therefore, there is going to be a vacuum. The constitution never envisaged this position, so there is no provision in the constitution to address the situation.

“But incidentally in the House Rules, we have a provision that envisage there may come a day where the speaker or deputy speaker, because we were all elected, would cease to be there, and that in the next sitting, the House shall elect new speaker. The clerk should notify the House of the vacancy and then a new speaker elected”, he said.

Amidst this, the governor-elect said “one of our colleagues came up with what may be called, in this case, not a doctrine of necessity, but an ingenuous solution to the situation or the problem.

“Instead of the House to go for the process of electing new speaker, since it is our rules, we come up with a motion which will suspend that particular part of the rules, and will now allow the deputy speaker to continue in his capacity as deputy speaker and will conduct the affairs of the House…before the lifespan of the House comes to an end.

“That way, we feel we are within the confines of the law without making anybody to believe that there is any other person that is indispensable. I am not. The constitution is greater than me. I believe that the House is an institution that will exist even if I leave as a member of the House. The House should be able to function under the leadership of the deputy speaker”.