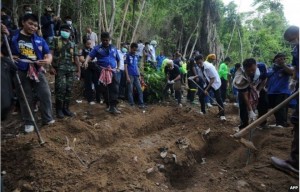 Thai authorities say more than 50 officers have been transferred from their posts over suspected links to human traffickers. BBC has more:

The announcement came after mass graves and more than 30 bodies were found in the south over the past week. The military junta has given local authorities until end of next week to close people smuggling camps.

Such camps have previously been known to the authorities, who have only recently moved to deal with them.

“We have transferred over 50 police officers over this issue because commanders in local areas know who has been involved in what,” Thai police chief Gen Somyot Poompanmuang said in remarks reported by Reuters.

He added that in the past “there were no sincere efforts to solve this problem”. Several of those transferred are believed to be senior personnel.