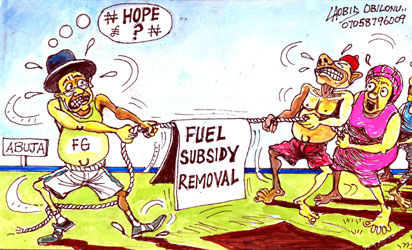 The Minister of Finance and Co-ordinating Minister for the Economy, Dr. Ngozi Okonjo-Iweala, yesterday, said the government has not removed fuel subsidy from the 2015 budget, as she confirmed that N145.2 billion provision was made for it.

“I want to clarify that there has been some misinformation that has gone around in the media about the fact that the National Assembly passed the 2015 budget without provision for fuel subsidy. It is not true,” she told newsmen in Abuja.

“It is important that you note that the National Assembly approved provisions of N100 billion for PMS (Petroleum Motor Spirit, otherwise called petrol) and N45.2 billion for kerosene subsidy. So, it is not true that they passed the budget without provision for subsidy,” she added.

The minister emphasized that managing the economy since the crash in oil prices had been very tough for her team which had to adopt various strategies to keep the economy running.

“As you know, I have been honest with you since the current economic problems started. I would like to repeat: we have serious challenges, things have been tough since the beginning of the year and they are likely to remain so till the end of the year. We have serious challenges but we also have strengths and if we do the right things we can keep a steady course and emerge out of the current situation.

“As a result of the 50 per cent decline in oil revenues, the country has faced a difficult cash crunch and the Federal Government has focused on keeping the economy stable and the government running through a series of measures. We have front-loaded the borrowing programme to manage the cash crunch in the economy.

“In January we had a deficit in terms of the money we had and the expenditure we had to carry out. So we had to borrow to add to what we had. In February, it was the same.

“In March, we were able to have more internally generated revenue that enabled us to offset but in April, we had to borrow to cover up some gap. This is how we have been managing the economy on a month-by-month basis.”

Although it is just May, Okonjo-Iweala said the Federal Government had already utilised more than half of the budgetary provisions for borrowing in the year. Part of the loans went to payment of salaries and others to fund overheads.

“Of the N882 billon budgetary provision for borrowing, the government has borrowed N473 billion to meet up with recurrent expenditure, including salaries and overheads. No capital release so far.

“Traditionally, the first part of the year witnessed low revenue because tax receipts come in from the middle of the year. This has compounded the challenges caused by the steep drop in revenues due to the oil price fall. As a consequence of the revenue challenges, there has been no capital budget release so far this year but we have kept the recurrent expenditure going.”

Okonjo-Iweala, however, noted that despite the cash flow problem the government faces, it has been able to keep the economy stable to the point that the Nigerian economy is doing much better than many other oil producing countries. It has been projected to grow at 4.8 percent this year.

“One positive feature despite the clear challenges is the fact that food prices, though inching up, are still quite stable. Also, inflation is still in single digit. This has helped reduce some of the pressure that Nigerians are going through.”