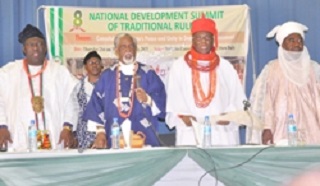 The 8th National Development Summit of Traditional Rulers began in Abuja yesterday with those in attendance commending President Goodluck Jonathan for his maturity in conceding defeat to Muhammadu Buhari even before the final tally of results was announced.

Chairman of the governing council of Traditional ruler’s summit, HRM Emmanuel Ekemejewa Siseso Abe I, said that this is the first time general elections ended without bloodshed in the country.

He commended President Jonathan for introducing a new political culture in Nigeria, whereby an incumbent could organize credible elections and also be willing to accept the outcome with equanimity.

“The way he congratulated his opponent shortly before the results were formally declared was a clear testimony of his disposition to peace. A number of other political gladiators followed his example, showing there is hope for the survival and triumph of Nigeria”, the monarch said.

He also congratulated the president-elect, Gen. Muhammadu Buhari (retd.) on his victory at the presidential election, saying the traditional rulers are confident that he is capable of making real change he promised to Nigerians in all spheres of our national life.

“We must assure him of our readiness to cooperate with his government to move Nigeria to the next level of all round soundness, peace, robust and progressive economy, political stability, high moral principles and ethical standards among the citizens and leaders. The expectations are very high and we appeal to all Nigerians to be patients because the stake is enormous. He needs Royal Fathers prayers and advice from time to time”, he said.

The Summit of Traditional Rulers was inaugurated in 2008 by late President Musa Yar’Adua as a non-political forum to foster friendship among traditional rulers and boost national peace, unity and development.