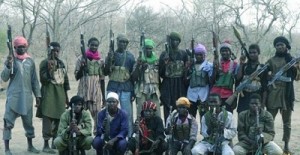 The Defence Headquarters, yesterday, said the man who supplies fuel and food to terrorists was apprehended in the early hours of Sunday at Daban Shata in the suburbs of Baga, Borno State.

According to the DHq, Military intelligence have been on the suspect’s trail for some time now until he was eventually trapped on Sunday. He is presently undergoing interrogation in a military facility.

Meanwhile the operation in Sambisa forest is continuing as troops are taking their time to search every aspect of the expansive terrain to ensure a complete flush out of Boko Haram militants in the area and also ensure that everybody abducted by the sect and kept in the forest was rescued.

Hopes are high that the troops would have flushed out Boko Haram from Nigeria’s northeast by May 29 when the incoming government will be inaugurated.