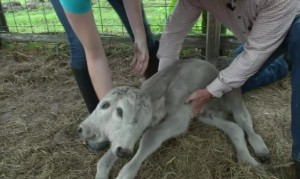 A Florida farmer said he was shocked when one of his cows gave birth to a living two-headed calf, but experts said the calf is unlikely to live for very long. UPI has more:

Dwight Crews, a Baker County farmer who has been raising cattle for more than 60 years, said it was clear right away that the calf born Sunday was unusual. “A two-headed calf! I can not believe it,” Crews told WJXT-TV. “I’ve heard of them, but I’ve never seen one. This is my first one.”

Crew said the female calf, which his daughter dubbed Annabel, has trouble standing up, but she has been feeding from a bottle. He said the calf’s other mouth moves when one mouth is suckling. The farmer said Annabel’s mother has been keeping tabs on her. “She will come in and lick her, smell her and make sure she’s OK, I guess, and then she’ll go back out and she’ll stay gone for a while and then she’ll come back again,” Crews said.

Crews said he has been in contact with Ripley’s Believe It or Not, which said the longest a two-headed calf has survived is only 40 days. The farmer said he is hoping Annabel can beat the record. “I would like to see her live, and see her get up and walk and function,” Crews said.