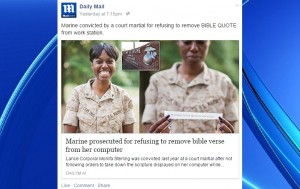 A U.S. Marine is fighting to overturn her conviction after she refused to remove a Bible verse from her work station.
A religious liberty law firm has filed an appeal on behalf of the marine after she was prosecuted for refusing to remove the Bible verse, which was attached to her computer. Lance Corporal Monifa Sterling was convicted in a court martial after she did not follow the order to remove the small paper with writings of the Bible from her computer. Worldwideweirdnews has more:

Sterling was stationed at Camp Lejeune in North Carolina, when she taped the slightly altered Bible verse that read: “No weapons formed against me shall prosper.”  Sterling, who is now unemployed and looking for a job, was given a reduction in rank from lance corporal to private as well as a bad conduct discharge.

Attorneys for the marine argued that the Religious Freedom Restoration Act should have been applied to her case.
However, both the trial and appellate court said that the law does not apply to her case because displaying a Bible verse does not constitute religious exercise.

The military judge found Sterling shared a desk with another marine, and the signs were visible to other marines who came to Sterling’s desk for assistance. The court found that her actions can easily be seen as “contrary to good order and discipline,” according to court documents.