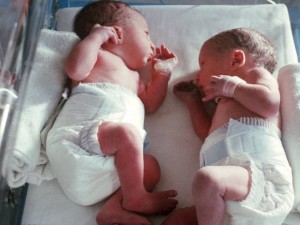 A paternity case involving a set of twins had a surprise ending worthy of a daytime TV talk show: The girls have different dads. Scoop reports:

A judge ruled Monday in a paternity case that the man from whom the twins’ mother sought child support has to pay for only one of the children. A DNA test showed that he was almost certainly the father of one twin but wasn’t the father of the other.

It’s rare for a woman to give birth to twins with different fathers. Passaic County Superior Court Judge Sohail Mohammed wrote in his opinion that he found two other court cases nationally on such matters.  It can happen when the woman has sexual intercourse with two men in the same menstrual cycle and two of her eggs are fertilized separately by each man.

The case came to light when a Passaic County woman sought child support payments from a man she thought was the father of her daughters, who were born in January 2013. The DNA test was conducted.  In court testimony, the mother said she had sex with both men in a span of about a week. The judge ruled that the man owes $28 per week.