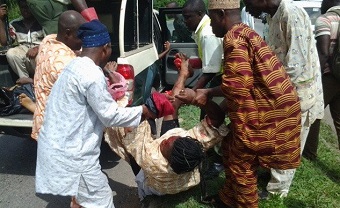 The Speaker of Ogun State House of Assembly, Suraj Adekunbi, has denied a report that he ignored the cries for help by some accident victims when his convoy drove by the scene.

According to a PREMIUM TIMES reporter, who met the accident victims in company with other sympathizers, Mr. Adekunbi’s convoy passed by while rescue efforts were on by residents of the area, without offering any help.

The reporter said witnesses lamented that rather than stop to help in the rescue operation, the Speaker merely peeped at the accident scene through his car window and then ordered his driver to drive on.

The lawmaker, however, claimed he was not in any of the vehicles.

Mr. Adekunbi, however, admitted driving by the scene of the accident without noticing any untoward incident.

“As at the time I passed through the scene with my colleagues, which include Honourable Tola Banjo, the Deputy Speaker, and Honourable Olayiwola Ojodu, we did not observe any accident. I was in Lagos when I heard of the accident”, he said.

When asked why he did not pick calls made to his phone on Saturday to confirm the development, Mr. Adekunbi said he did not know the identity of the caller hence he refused to answer the calls.

The Speaker, however, said he sympathised with the victims of the accident and prayed for the repose of the souls of the departed.