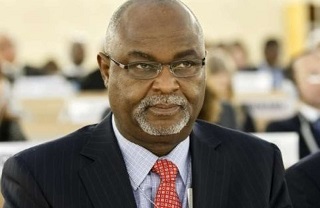 The Senate on Tuesday stepped into the matter of the suspension of the Permanent Secretary, Ministry of Foreign Affairs, Amb. Danjuma Sheni.

The perm sec was suspended from office by President Goodluck Jonathan over his alleged role in the recall of Nigeria’s envoy to South Africa following the wave of xenophobic attacks in that country.

Bringing the suspension to the attention of the Senate on Tuesday, Deputy Senate Leader, Senator Abdul Ningi (Bauchi Central Senatorial District), pleaded passionately for the red chamber to prevail on the Federal Government to recall Mr. Sheni.

Ningi said, “Recall that this Senate through a motion which all of us endorsed asked the Presidency to recall the Nigerian High Commissioner in South Africa over the Xenophobic attacks in that country.

“Recall too, that the Permanent Secretary Ministry of Foreign Affairs has been suspended and placed under an investigation for recalling the Ambassador without jurisdiction and without the clearance of the President who is the Commander-In-Chief of the Armed Forces.

“Aware that the President and Commander-In-Chief is responsible for such recall and also aware that the Permanent Secretary has no powers whatsoever to recall an Ambassador without a clear directive by the government.

“Knowing the anger and the mood of this country and believing that the Senate and indeed the National Assembly did the right thing in suggesting and urging the executive to recall the Ambassador.

“I therefore want this Senate not to look the other way but to urge the President, Commander-In-Chief of the Nigerian Armed Forces to tamper justice with mercy.

“It is indeed his responsibility, powers and jurisdiction and I think it is important at times like this that the Senate President should urge the President to tamper justice with mercy, so as to say the Permanent Secretary should not be dismissed.

“He did the wrong thing at the wrong time and he should not have done it because of the mood so the President, a humble man should tamper justice with mercy”.

The Senate, however, did not debate of the issue but Deputy Senate President, Ike Ekweremadu, said the matter would be relayed to President Jonathan, adding that “the recall of an Ambassador is a very sensitive matter”.