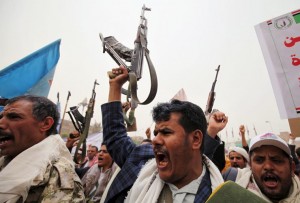 Three Saudi troops and “dozens” of Houthi rebels were killed as Saudi forces repelled a major attack from inside Yemen, Saudi officials say. BBC has more:

The rebels attacked near the town of Najran, reports say, in what would be their biggest assault on Saudi soil since a Saudi military campaign began. A has staged air strikes against rebels since late March in support of Yemen’s exiled president.

Meanwhile aid groups say a lack of fuel is threatening their operations there. A statement by the Saudi Press Agency, SPA, said the overnight attack happened on its southern border. Identifying the attackers as Shia Houthi rebels and groups allied to them, SPA said Saudi ground troops exchanged fire with them and called in air strikes.

The rebels – who control much of northern Yemen, including the capital Sanaa – have been fighting forces linked to the government for several months.