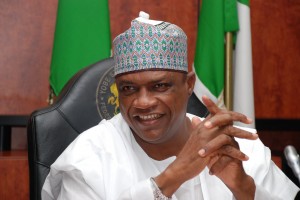 Governor of Yobe State, Alhaji Ibrahim Gaidam, at the weekend reiterated the support of the people of the state for Senator Ahmed Lawan (APC, Yobe North) in his bid to become the Senate President in the 8th National Assembly.

Gaidam, in a statement by his Special Adviser on Press Affairs and Information, Mallam Abdullahi Bego, dismissed as untrue, a report that he was against Lawan’s bid to become Senate President.

According to Gaidam, the government and people of Yobe State were totally in support of Lawan to emerge as the next chairman of the National Assembly.

The statement read in part, “Governor Gaidam believes strongly that at this pivotal moment in our nation’s history when the entire country is mobilised for positive change, the Senate needs a leader, who has the requisite experience, knowledge and network to organise and bring fellow senators around the issues that are uppermost in the minds of Nigerians – security, jobs, education, quality healthcare, electric power supply, etc.

“In short, we need a Senate President, who will work with our new President to advance all the noble causes for which our great party, the APC stands.

“Senator Ahmed Lawan has all the qualities which uniquely place him to lead the 8th session of the Senate.

“Already, senators from the north-western part of the country have endorsed his candidacy and are poised to support his emergence as President of the Senate”.

The governor, therefore, enjoined all senators-elect to consider Lawan’s experience, goodwill, capacity and reach and support him to be the next President of the Senate.

He also called on senators from the North-East Zone, where Ahmed hails from, to offer their support to him.

Gaidam faulted a report in a national newspaper on Friday, which claimed that he had supported another candidate, as he was “against the aspiration of Lawan for the Senate Presidency”.

He said, “The report was totally false and unfounded. Even before I travelled to Saudi Arabia for the lesser pilgrimage, I have worked, made, and had continued to make extensive contacts in support of Senator Ahmed Lawan’s quest for the Senate Presidency.

“My support for Lawan is so strong that during the last election campaigns, I stood solidly behind the Senator in Yobe Zone C and urged voters across the zone to support him”.