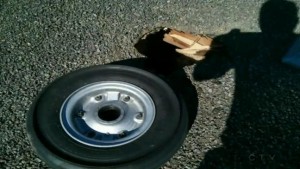 Canadian aviation authorities are investigating after an airplane wheel fell from a private jet and crashed through the roof of a Montreal apartment building. Residents of the building in St. Laurent said they were awakened by a thud coming from the roof about 2 a.m. Wednesday, but it wasn’t until the top floor resident returned home hours later that they realized an airplane wheel had crashed into the roof and punched a hole in the woman’s kitchen ceiling. UPI has more:

The Transportation Safety Board, which is investigating the incident, said the wheel fell from a Falcon 10 jet operated by Minnesota-based Club Jet Charter Jet Services. The plane landed safely at nearby Pierre Elliot Trudeau Airport shortly after losing the wheel, officials said.

“This morning my tenant come home to an apartment with a hole in her kitchen ceiling. She can see through the kitchen right to the sky. She came down at 5 a.m., rang our doorbell panicking and we went up to investigate,” the building owner, who wished to remain anonymous, told CTV News. “I think it’s ridiculous. It’s a plane tire. I mean, there’s got to be quality checks — someone checking that everything on the plane is attached and attached well. How can a tire just fall off a plane?” the owner said.

Edward McKeogh, a safety consultant with 60 years of experience in aviation, said investigators will likely start by looking at the maintenance manuals. “Usually when something like this happens, it happens not too long after a check of some kind and somebody does something wrong,” McKeogh told CTV. “I’m not saying that that’s the case but it can be reassembled, taken off, bearings checked, lubricated and it could have been reassembled wrong. It doesn’t take much.”