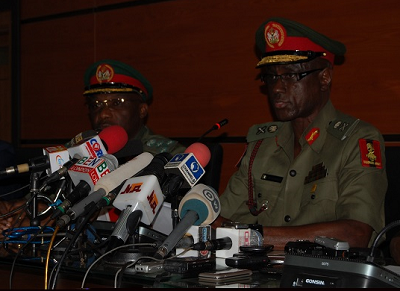 The Nigeria Army has faulted Amnesty International for refusing to cooperate with it on the probe of alleged human rights abuses by some serving and retired military personnel.

The Chief of Administration of the Nigeria Army, Maj. Gen. Adamu Abubakar, who stated this at a press briefing on Friday in Abuja, explained that following the receipt of a written request from AI on the allegations, the military promptly commenced investigations and consequently, several investigations on these allegations are ongoing.

It would be recalled that on June 3, the international human rights group released a report titled ‘Stars On Their Shoulders, Blood On Their Hands’.

The group called for the investigation and prosecution of senior military officers on the grounds that the military has committed crimes against humanity in its fight against terrorism.

In its reaction, the army accused Amnesty International (AI) of trying to bully Nigerian security agencies and personnel towards a premeditated goal and expressed concern about what it describes as reckless and baseless allegations of war crimes, “which affects the morale of troops, especially those involved in the ongoing counter-terrorism operations in the North-east”.

“The essence of offering Amnesty International membership of the investigation panel was to guarantee fairness and justice while proving to the world that the military has nothing to hide or cover up”.

While it took Amnesty International from 2011 – 2015 to chronicle their allegations, Abubakar said the human rights body, however, wants the Nigerian military to investigate and report immediately.

Stressing that much of AI’s allegations were a repetition of earlier allegations with only figures of casualty arbitrarily fixed, the army chief of administration said preliminary investigation reports of panels set up to look into the body’s allegations had resulted in the release of some under-aged detainees, women and children from some military holding facilities.

He said, “Sequel to the report of the investigation panel, 42 detainees were handed over to Borno state government on Thursday, November 6, 2014 and another set of 124 persons were also handed over to the state Government on November 8, 2014 respectively”.

“Upon release from detention, the individuals were each given the sum of N100,000 to begin their lives again by the military while the living condition of the detainees was improved upon with the decongestion of holding facilities.

“Some investigations have turned in their preliminary reports, which have been acted upon. Some of the investigations could not be concluded due to the inaccessibility of the terrain due to the activities of Boko Haram terrorists”.

According to him, the Defence Headquarters set up two Joint Investigation Teams to investigate, screen and categorise suspected insurgents in detention, adding that out of the 504 suspects screened, prima facie cases were established against 350 suspects and they were recommended for trial at the Federal High Court.

Their case files, he said, had been forwarded to the Office of the Attorney-General for necessary action.

“The Nigerian Military has also allowed the International Committee of the Red Cross to visit the detainees and other location at the shortest notice without hindrance and even talk to the detainees and locals. Certainly if the Nigerian Military has or had any reason to hide anything it could not have allowed International Committee of the Red Cross access to its facilities and operational area”, Abubakar stated.