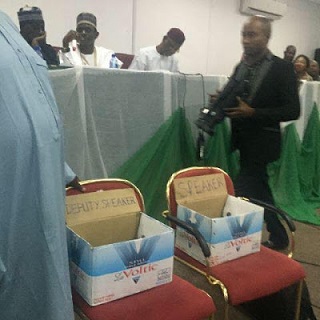 The National Association of Nigerian Students (NANS), has urged the All Progressives Congress (APC) to allow legislators to choose their leaders in a democratic manner.

This call is contained in a statement signed by NANS’ President, Tijani Usman, and made available to the News Agency of Nigeria (NAN) in Abuja on Sunday.

According to the statement, leading of the National Assembly is beyond party politics.

The statement said the legislators should be given a free hand to decide those with impeccable credentials to lead the National Assembly.

“Nigerians are in a hurry to witness the change promised by the APC. The party should not allow itself to be entangled in issues that do not portend well for the polity.

“The party must desist from trying to have overbearing influence on the legislature, including choosing its leaders.

“Allow Senators and Members of the House of Representatives to elect their leaders in a free and transparent process.

“Agreed, the APC is the majority, but other political parties also have a say in who emerges.

“Therefore, let the process be devoid of interference from political parties”, the statement said.

The statement, however, recalled that APC had on June 6, organised a mock election of candidates for the positions of Senate President, Speaker and their deputies.

It said the mock polls ended in disagreement as some legislators boycotted the exercise.

“If the differences amongst the APC legislators are not quickly resolved democratically, the party might be distracted from the start in delivering its campaign promises”, the statement added. (NAN)