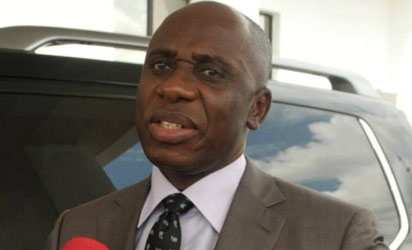 The immediate past Governor of Rivers State, Mr. Rotimi Amaechi, on Tuesday said he and his commissioners left handover notes, contrary to Governor Nyesom Wike’s claim.

Instead, the former governor said the Federal Government owes the state N108billion for completed federal roads.

Mr. Amaechi, in a statement in Abuja by his former Commissioner for Information, Mrs. Ibim Semenitari, also denied selling off the state’s power plants, explaining that the state only sold 70 per cent of its equity in the power plants to investors.

He said the sale of the equity in the power generating assets’ company was captured as income in the 2014 Appropriation Law.

The statement said: “On Monday, June 22, Mr. Nyesom Wike, briefed the media and made numerous allegations. These allegations are the same ones that Mr. Wike set up a commission of inquiry to investigate. However, in keeping with Rt. Hon Chibuike Amaechi’s commitment to good governance and to transparent and accountable stewardship to Rivers people, we will reiterate the facts.

“Alleged non- submission of handover notes. There is no truth in this as all commissioners and heads of MDAs submitted their handover notes to the Secretary to the State Government who forwarded same to the Head of the State Civil Service as it is appropriate.

“Governor Amaechi also directed the Deputy Governor of Rivers State Engr. Tele Ikuru, to be the liaison between the outgoing administration and the incoming one. Engr. Ikuru, as Deputy Chairman of the state Executive Governor and second man in government, had all facts necessary to brief the incoming administration.

“He also had unfettered access to Government House and to every commissioner and head of Ministry Department or Agency”.

“It is on record that other states like Akwa Ibom and Abia received repayment for the federal roads they constructed. As at when Governor Amaechi was leaving office, the debts owed the contractors in the Ministry of Works, which were for ongoing road projects, totalled N44, 942, 354, 44.10”.

On the state’s power plants, Amaechi said only 70% equity of the projects was sold to foreign investors.

The statement said: “For the records, the Government of Rivers State under Dr. Peter Odili made substantial investment in electric power related Projects with the aim of mitigating the malaise of inadequate power supply. The projects included generation (Omoku and Trans-Amadi 1), transmission and distribution interventions. Rt. Hon. Chibuike Rotimi Amaechi on assumption of office recognised the importance of improved electric power supply in the socio-economy regeneration of the State. “At the time Rt. Hon. Chibuike Rotimi Amaechi assumed office, of the 350 Megawatts (MW) total capacity generation assets invested by the state, only 70MW (equivalent to about 20 per cent) was available.

“With enthusiasm, Rt. Hon. Chibuike Rotimi Amaechi ramped up the efficiency to 77 per cent availability, including injecting another 360MW Green Field Generation Project at Afam, of which 180MW have been commissioned and is in commercial operation.

“To mitigate the swing in efficiency and its debilitating impact on the economy, the State Government sought private sector operators and sold 70 per cent equity stake in the power generating assets’ company to NG Power HPS. For the transaction, the State Government adopted the same model as the Federal Government in the sale of Egbin Power Plant.

“The sale was at a price per MW higher than all the privatisation MW rate done by the Federal Government. The proceeds from sale of the equity in the power generating assets’ company was captured as income in the 2014 Appropriation Law and deployed into funding capital projects as appropriated”.

Amaechi also faulted his successor for alleging that he did not pay workers’ salaries, saying “All civil servants received their March salaries while payment for April salaries had commenced by the time the administration was winding down.

“Again I reproduce for the avoidance of doubt, excerpts of Governor Amaechi’s valedictory speech in this regard. ‘As at today, we have commenced the payment of April salaries and parastatal pensions. We have made the requisite provisions and expect all salary payments to be concluded as funds are received’”.