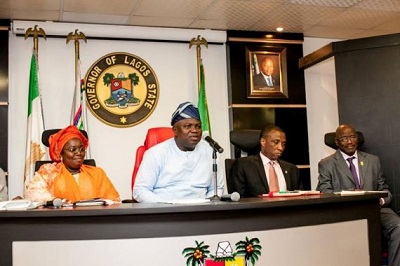 Lagos State chapter of the Peoples Democratic Party, PDP, has told the Governor Akinwunmi Ambode to stop blaming tanker drivers for recent road crashes and fire incidents in the state.

In a statement issued on Wednesday by its Publicity Secretary, Mr. Taofik Gani, the PDP stated that the warning given to tanker drivers plying Lagos roads by the All Progressives Congress-led government was misplaced.

PDP also condemned the APC for “playing the ostrich and being diversionary” concerning various accidents occuring on Lagos roads.

“This is in a manner that suggests that the drivers could avert accidents”, the statement said.

According to the PDP, the state government should be held liable for abandoning the state roads and not road users.

“Of urgent importance is for the state governor, Akinwunmi Ambode, to copy from the Rivers State Governor, Wike Nyesom, who recently declared a zero tolerance to pot-holes on roads in the state. Governor Ambode should also not look the other way on the rising threats of miscreants on the roads.

“These miscreants boldly take over our roads to stop vehicles abruptly just to extort money. Their activities have led to accidents on our roads. This (APC) government must now hit the ground running by handling the rehabilitation of our roads and effect the immediate clearing of drainage which would be a landmark if achieved.

“It is unfair to blame the people of causing road accidents or flooding when in actual fact the state government agencies responsible for correcting citizens’ inadequacies have neglected their duties”, the statement said.

The PDP also called on spiritualists to embark on “fervent prayers to avert further mishaps in the state under this administration.

“Ambode should work and deal with any human or administrative hindrances. Lagosians are tired of excuses”, the PDP added.