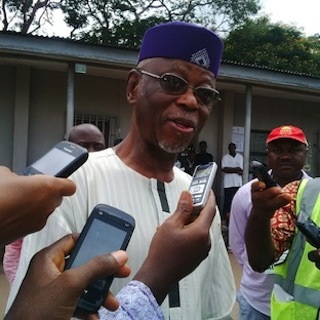 The All Progressives Congress, APC, on Friday made a U-turn in its position on the emergence of Senator Bukola Saraki as President of the Senate.

The National Chairman of APC, Chief John Odigie-Oyegun, who made the party’s latest stance known Friday, said the reality was that Saraki’s colleagues had duly elected him and the party was ready to live with that fact.

Odigie-Oyegun spoke with State House correspondents shortly after joining members of the transition committee set up by President Muhammadu Buhari to present their report to the President at the Defence House, Abuja.

The APC had threatened to sanction Saraki and Speaker of the House of Representatives, Mr. Yakubu Dogara, both of the APC, for defying its directive not to contest against its preferred candidates, Senator Ahmed Lawan and Hon. Femi Gbajabiamila.

However, while responding to a question if the party would accept Saraki as President of the Senate, Odigie-Oyegun said, “Of course! He has been duly elected by his colleagues. We have a reality and we must live with it”.

On the much publicized visit of the Senate President to the APC secretariat on Thursday, which was aborted in the dying minute, the party chairman said there were a lot of consultations going on at that time and he could not have been in two places at the same time.

Mr. Oyegun, however, said party chiefs were already in talks with Saraki and would not want to make noise about it.

“Nothing went wrong (on Saraki’s aborted visit), there were a lot of consultations and you can’t be in two places at the same time.

“So, it was not comfortable for us, but we have been talking. We don’t want to make a song and dance of it, everything is being put in proper perspective”, he said.

On the crisis that erupted in the party after the elections in the National Assembly, Odigie-Oyegun said the APC had faced greater challenges before and the latest one too would pass away.

“It is not the first or second time we have passed through this kind of scenario and we came out strong. This may not even be the last time, we come out every time stronger and more determined”, he said.

The party chairman said what happened was within the APC family and they were sorting it out at that level.

He, however, noted that aggrieved persons who threatened to go to court were doing so within their rights.

“People say they are going to court which is their right, but as a party, we are looking at everything and we are coming out strong”, he concluded.