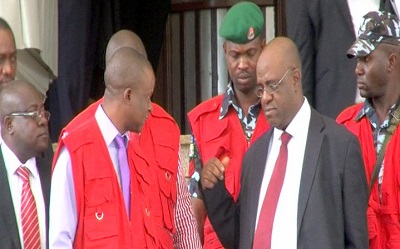 The Court of Appeal, Abuja Division, on Friday rejected the bail application of a former Managing Director of the Nigerian Security Printing and Minting Company, NSPMC, Emmanuel Okoyomon, whose extradition is being sought by the United Kingdom.

The U.K. government is seeking Okoyomon’s extradition over his alleged role in the bribery allegation involving officials of the Central Bank of Nigeria, the NSPMC and Securency International Pty of Australia between 2006 and 2008.

However, the court granted Mr. Okoyomon’s plea for stay of execution on the order to extradite him.

The U.K. government had, through the office of Attorney General of the Federation, requested Mr. Okoyomon to be extradited to face charges of corruption and money laundering

In a bid to stall his extradition, the former Mint boss had, in October 2014, through his counsel, Alex Iziyon, SAN, challenged the jurisdiction of the court to entertain the application to extradite him.

Mr. Iziyon argued that there is no extradition treaty between Nigeria and the United Kingdom.

He further argued that the London Scheme for extradition within the Commonwealth 2002 does not apply in Nigeria.

However, M. S Hassan, who represented the Attorney General of the Federation, countered Mr. Izinyon’s submission.

Mr. Hassan argued that the 1931 treaty became applicable to Nigeria in 1935 and was never repealed by any enactment, stressing that schedule 2 under Extradition law provides that, “the law shall apply to all Commonwealth Nations”.

Ruling on the matter on May 4, 2015, Justice E. S Chukwu of the Federal High Court sitting in Maitama, Abuja, ordered Mr. Okoyomon to be extradited to the UK within 30 days from the date of the ruling to face trial, while being remanded in prison custody pending his extradition.

Dissatisfied by the ruling, Mr. Okoyomon, through his counsel, Mr. Izinyon, approached the Court of Appeal seeking a stay of execution of the order of the lower court.

The appellate court, in its ruling on applications Friday, refused his bail, while granting a stay of execution on his extradition pending the determination of the appeal before it.