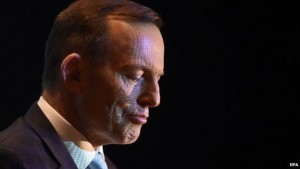 Australia says it will reveal new laws stripping citizenship from dual nationals engaged in terrorism. The government said it wanted to ensure that militants with dual nationality who were fighting overseas could not return to Australia.  BBC reports:

The laws would also strip citizenship from dual nationals who engaged in terrorism inside Australia. The government said changes to the Australian Citizenship Act would be introduced to parliament on Wednesday.

The new laws could be applied to up to half of the 120 Australians fighting in the Middle East with Islamic State (IS), said Prime Minister Tony Abbott. “The legislation will update the Australian Citizenship Act 2007 to ensure dual nationals who serve or fight for terrorist groups, or engage in terrorism-related conduct inspired by terrorists groups, automatically lose their Australian citizenship,” Mr Abbott said in a statement released on Tuesday.